Emotions flared up at Makerere Business Institute, as journalism students at the campus hassle out their journalistic skills in the Media fest that happened on the 20th of May, 2022

Emotions flared up at Makerere Business Institute, as journalism students at the campus hassle out their journalistic skills in the Media fest that happened on the 20th of May, 2022 in four various halls that were established to comemorate the legendary veteran late journalists in Uganda which include; Bbale Francis, Kyazze Danny, Nambazira Nuriat and Nankabirwa Rosemary. 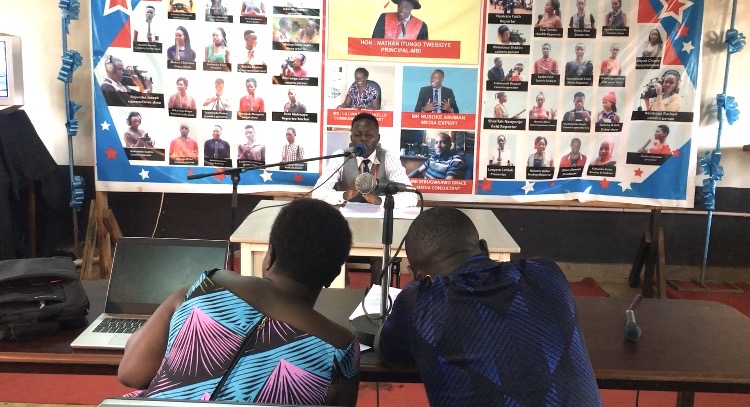 The competition was organized with the intention of inspiring the freshers at the campus and providing a platform for them to express themselves outside classroom work, preparing the students for the forthcoming Media Challenge Initiative inter-university competitions.
As the day drew down, the competition exercise became stiff and intense as participants exhibited what they knew best and were good at in order to culminate victory, Put marks of their names on the campus journalism students’ wall of fame and also register their names for the IMC competitions.
“I have always wanted such an opportunity to express myself and from today, I am going to do my best to see that am on the team that will represent MBI in the Inter-University Challenge competitions this time around,” said Michael Mukisa a student at MBI.
As the competing categories drew to climax, pressure and temperatures mounted in the main auditorium, and excitement and happiness manifested on the campus while the participants were silent and tensed.
“I have realized that it’s not about me, but rather the love for my career. Honestly, I have been selfish to myself and everyone around me. This particular fest has opened my eyes and is now out of my comfort zone,” said Derrick Kabyanga MBI student.
Ms Lillian Akello an administrator and patron for the competition said, “ it is amazing that all of you have come out and embraced your talents. It gives me much joy to see you get out of your comfort and arrive in the real world. Keep it up. It is a sign of growth.”
At around 6:30 pm, the moment of truth also came along, the moment to reveal who occupied the first place in the competition, and put their names on the school journalism team for the MCI competitions.
With the defending champion of the competitions Nankabirwa hall in 2018 when they were launched, it once again merged victor with Bbale hall coming into the second place, Nuriat hall and Kyazze in the fourth position.
The panel of judges unanimously agreed the declared the hall with the highest number of awards putting Nankabirwa in the top position with 9 awards, Bbale 4 awards, Nuriat 2 awards and Kyazze 1 award.
The awardees included Suzan Angel Tindinyenka, Marvin Leonard Bukenya, Kenneth Kabuye, Gladys Namirembe Derrick Kabyanga and others.
Tags: Bbale FrancisKenneth KabuyeKyazze DannyMakerere Business Institute