The Race is on; Who will be MBI's next Mr. and Miss

Unrest erupted immediately after the Electoral commission chairperson of Kampala International University announced Laureate Atukunzire as the Guild president without allowing voters to cast their votes accusing the other candidate, Moses Ebye was not fit to continue.

Ebye like Atukunzire had all the requirements apart from a running mate which saw EC chairperson Solomon Oketcho declare Atukunzire duly elected Guild president. A frustrated Ebye accompanied by his fans took to the Electoral commission table and grabbed all the declaration forms immediately after the chairperson made the announcement.

The EC chairperson, Solomon Oketcho was rescued by KIU security operatives from a charging crowd who looked hostile and angry with him and his team. Some members of the Electoral Commission were reportedly seen taking off in a car that had parked near the polling station. 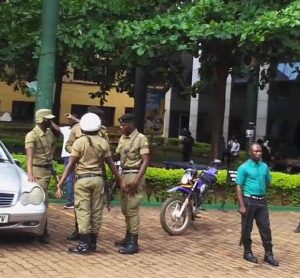 The situation required external security to calm down but there was no injury or damage required apart from the declaration forms that were deformed and a few documents that were torn into pieces.

According to Jacob Musiimenta, the outgoing Guild president, the controversy in today’s poll will only be resolved by a special sitting of the University’s students affairs leadership and the legal team.