The dynamic duo, exquisitely proved that the sky is no longer the limit before them as they sweetly performed.

by Kenny Kabuye
381 20
0
552
SHARES
2.5k
VIEWS
Share on FacebookShare on Twitter
On the night of Tuesday 19th April 2022, Esther and Ezekiel graced the Canada Got Talent stage. They could not believe themselves until they were called to the stage to do what they know best thus impressing the judges before allowing them a chance through the season 3 auditions.
The dynamic duo, exquisitely proved that the sky is no longer the limit before them as they sweetly performed the “ No air” cover song by Jordin Sparks and Chris Brown making the judges and audience overwhelmingly impressed and couldn’t believe their ears either upon listening to what the two budding talents had in them.

Ugandan vocalists Esther and Ezekiel light up Canada Got talent 😎😎.

Take a look at how they wowed the audience and judges.#MCIRadioUg pic.twitter.com/cAudhfYmIK

The two siblings vocalists first hit the stage in 2019 during East Africa got Talent auditions that were in Kenya and they emerged victorious scooping the USD 50000 grand prize which they have not received to date. 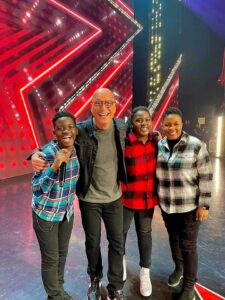 Since then, they have been part of several talent competitions hence enabling their contest for Canada Got Talent auditions.
Ezekiel 13 and Esther 17 the Ugandan natives now living in Canada are children to the now divorced Julie Birungi a popular Ugandan gospel singer and pastor Steven Mutesasira.
The two attributed the victory to their mother Julie and thanked her for continuously supporting their musical endeavours.
Tags: Canada Got TalentEast Africa Got TalentEsther and Ezekiel