Ministry of education temporarily bans artists from performing in schools

The entire community of Muni University is in a sad mood after their Vice Chancellor Professor. Christine Dranzoa passed on at Mulago National Referral Hospital on the 28th June 2022. She has also been the Chairperson Executive Committee Inter University Council for East Africa (IUCEA). 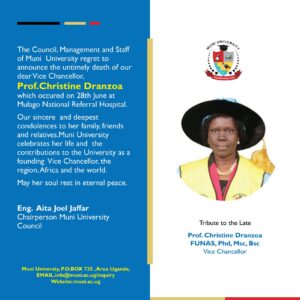 Prof. Christine was officially installed as the university’s Vice Chancellor on 4th November, 2017 in a ceremony presided over by the then Prime Minister Ruhakana Rugunda who represented President Yoweri Museveni

She was born in 1967, in what was known as Moyo District at the time. Today, her home district is known as Adjumani District.

Prof. Christine Dranzoa had a Bachelors degree of Science (BSc) in Zoology, obtained in 1987, from Makerere University.

She also held the degree of Master of Science (MSc), in Zoology, obtained in 1991, also from Makerere University. Her degree of Doctor of Philosophy (PhD) in Biology was obtained from the same university in 1997.

Prof Dranzoa also had about half a dozen certificates in management, conservation, and project planning from Ugandan and International institutions.

The Family has already laid down a program for the burial program. 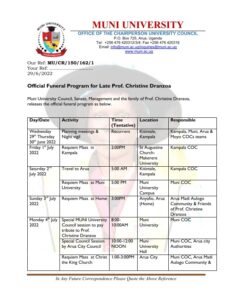 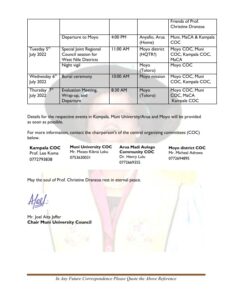 May her soul rest in Eternal Peace.