Most times when one meets a musician, the first thing that comes to their mind is that they are drug addicts, drunkards, to mention but a few.

According to Mikie Wine, he states that he has never taken alcohol but it is quite ironic considering the fact that he is a brother to H.E Kyagulanyi Robert aka Bobi Wine who was born and raised in a ghetto and the slums of Kamwokya.

“I am a book, but people were only reading the cover. They see you with this kind of hair and they judge you the way they see you. I don’t drink alcohol and I have never. I only tasted it and I realized it was not working for me.” Mikie stated.

The artist started his musical journey in mid 2000s following the footsteps of his elder brother Bobi Wine and even if he faced some hardships, he was able to overcome them all.

Levixone’s background is not so different from that of Mikie because he also grew up in the slums of Kosovo although this was as a result of having run away from the wrath of his stepfather.

At a very young age he went into street life and then went through a series of job hustles just to provide for himself and during this period he stole and even used drugs at some point but he later quit.

After quitting, he was then taken in by “Fields of Life”, a non-denominational Christian International Development Organization that supported him by taking him back to school. 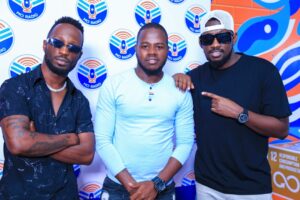 It’s only after witnessing one of his friends being killed by a mob after being accused of stealing something from a group of South Sudanese that Levixone was forced to transform.

Both artists have gone against all the odds and made it among the top most known artists in the country.