The Media Challenge Initiative today hosted the 3rd edition of the MV talks at their hub in Kabalagala.

The event aimed at discussing media viability and post COVID lessons and opportunities. It attracted a number of guests who on arrival where given a tour around the MCI hub premises.

The agenda of the event included a lot of things like a virtual speech from the CEO of MCI Mr Mpindi Abaas who currently is out out of the country.

In his speech, he told the guests the major aim as to why the MCI is in place which is to create a space where needs for communication are solved. He further advised the guests to network with each other in regards to the projects they are working on.

The event included a TV channel session that involved a discussion about how the different tv stations managed to survive in the COVID-19 period and the effect it had on them.

The guest speakers of the discussion included Mr. Moses Kasasa a stations manager of Bukedde TV1, Mr Peter Mukibi the creative director of Admire and Mr Mwine Julian the head of news at NTV.

“Laying off workers was the hardest decision for me” said Mr.Kasasa. He stated that workers were laid off depending on the skills they had. Advertisers and sponsors also stopped coming in hence they resorted to education like printing out pass PLE. 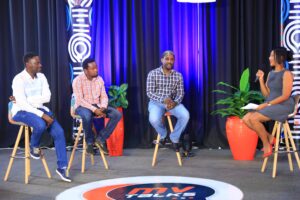 In addition to the above, Mr Kasasa said that they mainly depended on citizen journalism during the pandemic and calling the sources to verify the information in the stories that citizens provide.

He also said that the COVID 19 period helped different stations to come up with so many new innovations.

While speaking in the discussion, Mr.Mukibi hinted at COVID 19 opening up people’s minds thus forcing them into doing things they had never done before.

“COVID-19 affected their creative industry but technology helped them to come up with new things and it as well made brands reduce their marketing budget but also in a positive way empowered local talent and expertise.” Mr. Mukibi cited.

Speaking in the same discussion, Mr Mwine noted that the COVID-19 period helped in increasing the number of viewers at NTV though advertisement reduced.

“There was an increase in the request for live shows and dialogues from NGOs and the government which helped out the channel financially,,,” Mr Mwine said.

The discussion then ended with final remarks from the guest speakers where Mr.Mukiibi advised the young journalists to start up their own thing with any equipment that they have, be it a phone.