"Go ye' into the world and serve mankind"

It was all smiles and ululations at the 25th graduation ceremony of Kampala International University at the Main Campus in Kansanga as graduands, parents and guardians celebrated the culmination of years of education into great milestones
The conferment of Degrees and award of Diplomas went off without a hitch putting to bed rumours from sections of the community that had earlier anticipated protests from some disgruntled university students.
The well-organized event had a total of Two thousand three hundred and ninety-four students graduated in various disciplines with One thousand thirty-five females, representing Forty-three per cent while one thousand fifty-nine were male making Fifty-seven per cent of the total number of graduates. 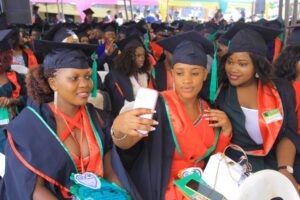 The Twenty fifth graduation ceremony had Fifty-two per cent representation of the quota from the Kampala-based Main Campus while Forty-eight percent were from the Bushenyi-based Campus.
Professor George Mondo Kagonyera the Former Chancellor of Makerere University was the Chief Guest, in his speech he applauded Al-Hajj Hassan Basajjabalaba as a champion of civilization even with a very humble education background who he was proud to be associated with over the years, especially in the ways he continues to exploit the heights in the education sector just like the motto of the university.
He Further recognized the huge role played by the university council, the board, the parents and guardians and various stakeholders in the journey that has transformed Kampala International University over the years, Making it currently the 2nd Best Overall University and the Leading Private University in Uganda.
Kampala International University is one of the few universities that adopted the online system of class delivery for students and continuity of core education principles through the covid 19 pandemic. The University had three virtual graduations. In his speech, Professor Kagonyera asked other Universities to benchmark these achievements. 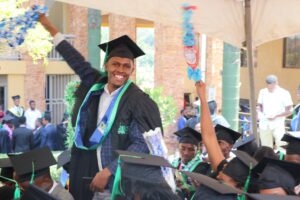 In his Message to the government, he urged the president and the relevant ministries to scrap work permit fees, especially for academicians who according to him are doing the country a favour and as intellectuals should be citizens of the whole world.
The Graduands were urged to consider Knowledge as important and critical to complement their skill set and competence as they go forth and serve mankind.

Pictorial moments as captured at the #KIU25thGrad

Congratulations to all the graduands pic.twitter.com/HqU77TDzK1