Expect This @Afropalooza This Weekend!

We are hosting the first-ever edition of #Afropalooza from the 8th – 9th of October at the Lugogo Cricket Oval in Kampala, Uganda.

Ugandans are ready to pop the party this weekend for the Afropalooza Festival that is going to happen at Lugogo Cricket Oval on the 8th and 9th of October. 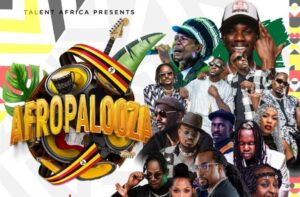 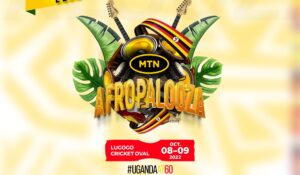 This festival is meant to give a platform to over 60 Ugandan entertainers. It starts on Friday 07, October with a pre-party at the Villa in Bukoto featuring; Deejays: Sal, Tonny and Melvyn, MC Isaac and Spice Diana together with appearances from other high-profile guests.

On day one, Saturday 8th October, the Afropalooza Festival will be under the theme “Urban Afrobeat Explosion”. The performance acts in line include; Beenie Gunter, Big Tril, Navio, Lillian & Sundowners, Vampino, Rickman, Vinka, Maurice Kirya, The Mith, Lamu, Janzi Band and many others. The deejays and Hosts of the first day are; Selector J and MC Isaac, Sheila Salta, Timothy Code, Viana Indi and MC Isaac in that order. The most highly anticipated act of day one will be a performance from the Nigerian superstar, Rema. 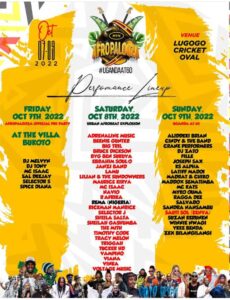 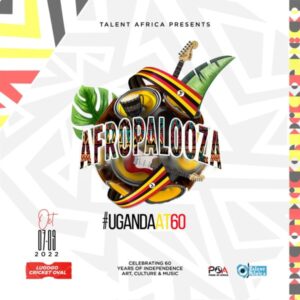 The biggest jubilations of the festival will happen on Sunday 09 October 2022, which also doubles as Uganda’s Independence Day.

Independence Day will also be the second day of the Afropalooza festival. It will be on the theme, “Uganda at 60“. The day will feature the following artists; Zex Bilanjilangi, Ragga Dee, Cindy & the Band, KS Alpha, Joseph Sax, Fille, Myko Ouma, Winnie Nwagi, Madoxx Sematimba, Ykee Benda, Suzan Kerunen and many more. Other acts will include comedians like; Madrat and Chico and Salvador, hosts MC Kats and DJ Zato, among many others. Kenya’s singing sensation boy band, Sauti Sol will perform as well on the same stage that day.

Uganda 🇺🇬, are you ready for a good time?

We are super excited to celebrate 60 years of Independence with you!

Hosted by Talent Africa Group, this debut edition of the Afropalooza festival aims to celebrate Uganda @60 years of Independence with 60 performers including the biggest Ugandan performing artists from the past, present and future.

This event also features a pearl of Africa Market place for Arts and Crafts, the taste of Uganda Food village as well as a projection mapping showcase and the most beautiful display of fireworks in Uganda ever.